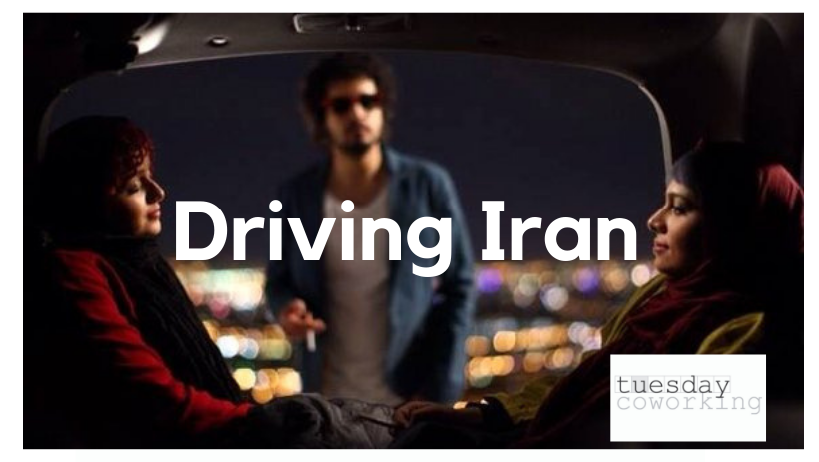 Cinema Nights return to tuesday coworking with a new, four-week long series
Driving Iran
#drivingiran #tgituesday #tuesdaycoworking
In this series, we look at four films (from 2002-2015) by Iranian directors, some famous, some not so famous, who chose to investigate Iran’s society, politics, culture and interpersonal relationships. Simultaneously we examine the use of the car as a cinematic tool to provide a perhaps more interesting stage for scenes of intense dialogue, which shed light on a variety of issues affecting people’s lives in Iran.
And given that Iran has some of the highest road-accident rates in the world (20 times higher than the global average according to a recent UNICEF report), what more intriguing/morbid a lens to look at Iranian society than through the car? Who knows, perhaps at the end we’ll know why this is the case!
The series is mainly, however, a contemplative look at Iranian society and an attempt to showcase Iranian cinema, perhaps providing insights into an Iran about which we in “the West” may not know as much as we think.
All films are in Farsi with English subtitles and, as always, entry is free (donations welcome!)
Location: tuesday coworking, Belziger Strasse 71, 10827 Berlin-Schöneberg
Schedule:
Atomic Heart (Madar-e Ghalb Atomi) (2013) by Ali Ahmadzadeh, 1h 37m 20:00, Tuesday, 22 Jan. 2019
Mourning (“Soog”) 2011 by Morteza Farshbaf, 1h 32m 20:00, Tuesday, 29 Jan. 2019
Ten (2002) by Abbas Kiarostami, 1h 34 mins 20:00, Tuesday, 5 Feb. 2019
Taxi Tehran (2015) by Jafar Panahi, 1h 22m 20:00, Tuesday, 12 Feb. 2019
_____________________ 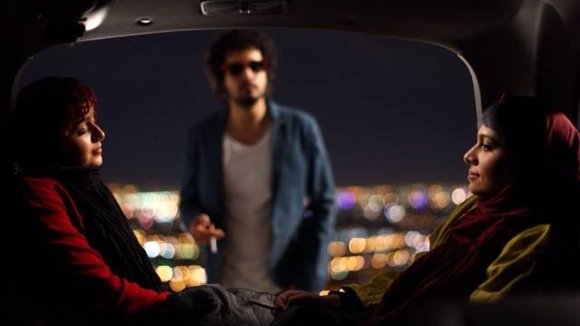 Atomic Heart (Madar-e Ghalb Atomi) (2013) by Ali Ahmadzadeh Farsi with English subtitles, 1h 37m
When: 20:00, Tuesday, 22 Jan. 2019 at
Where: tuesday coworking, Belziger Strasse 71, 10827 Berlin-Schöneberg
The plot is set at the beginning days of Mahmoud Ahmadinejad’s “Subsidy Reform Plan”, and spans one single night. Two friends, Arineh and Nobahar, cruise the streets of Tehran after leaving a party at midnight. After meeting their friend, Kami, who is planning to immigrate from Iran, they cause a road accident. A mysterious stranger, Toofan, tells them he has settled the accident issue by paying off the other driver. Here the plot shifts from realistic to spooky and metaphysical, when Toofan keeps on re-appearing, talking about dead dictators, weapons of mass destruction and parallel worlds.
_____________________ 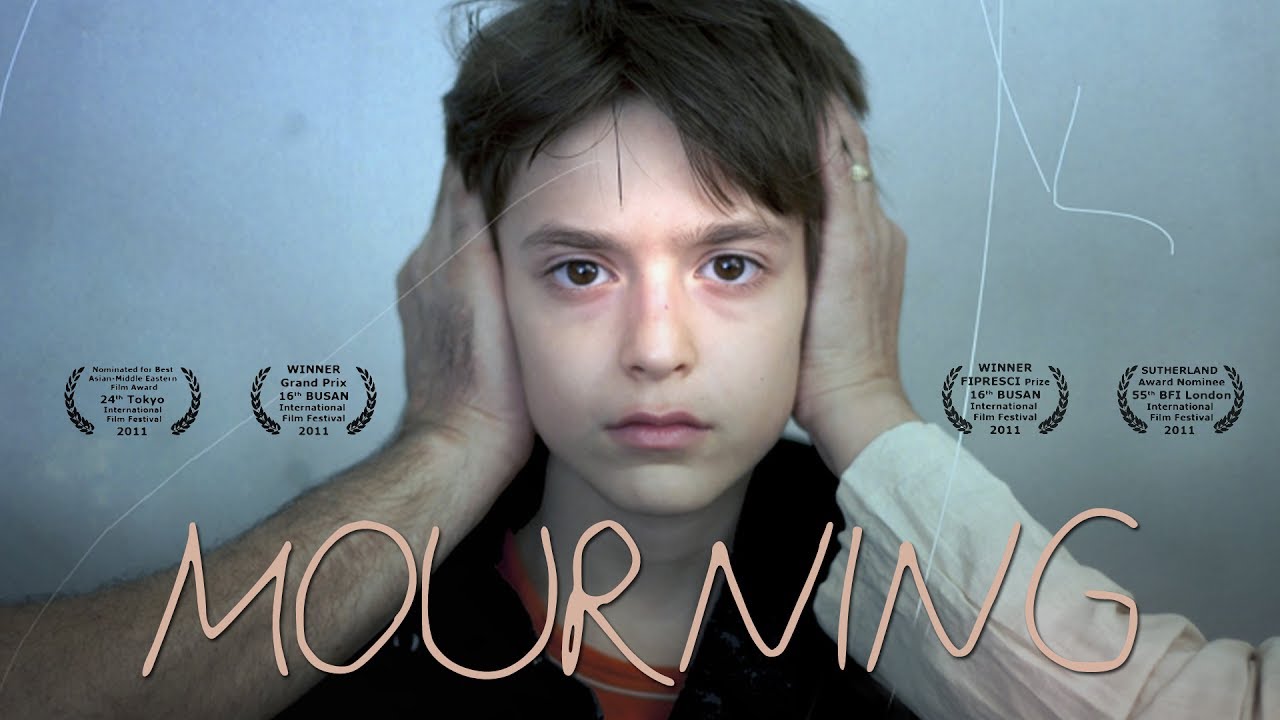 Mourning (“Soog”) 2011 by Morteza Farshbaf Farsi with English subtitles, 1h 32m
When: 20:00, Tuesday, 29 Jan. 2019
Where: tuesday coworking, Belziger Strasse 71, 10827 Berlin-Schöneberg
An artsy tale of compassion and overcoming the limits of emotional and physical disability, “Mourning” was included in festivals around the world.
When a quarrel breaks out between a couple in the early hours of the morning while visiting relatives, they drive off into the darkness, forgetting their young son Arshia behind them in the process. The mother’s sister Sharareh and her husband Kamran find themselves tasked with deciding what to do with Arshia.
What makes Mourning unique is its reliance on visuals to convey the unfolding narrative. Simultaneously, Farshbaf lets the audience in on the couple’s private conversation, and we conspire along with them.
Farshbaf, who took workshops under legendary filmmaker Abbas Kiarostami’s tutelage, offers a nod to the director’s work through his use of long shots of the car as it navigates its way through the vast Iranian landscape.
A nuanced and often darkly comical take on how people learn to understand those around them. Kiarostami Lite.
_____________________ 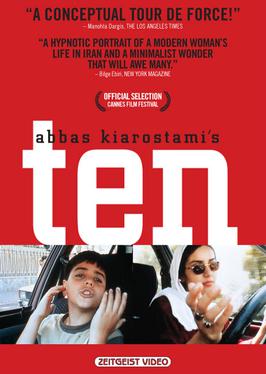 Ten (2002) by Abbas Kiarostami Farsi with English subtitles, 1h 34 mins
When: 20:00, Tuesday, 5 Feb. 2019
Where: tuesday coworking, Belziger Strasse 71, 10827 Berlin-Schöneberg
Ten is divided into ten scenes, each of which depict a conversation between an unchanging female driver (played by Mania Akbari) and a variety of passengers as she drives around Tehran.
Her passengers include her young son, her sister, a bride, a prostitute, and a woman on her way to prayer. The film explores personal social problems arising in Iranian society, particularly the problems of women and was nominated for the Palme d’Or at the 2002 Cannes Film Festival.
_____________________ 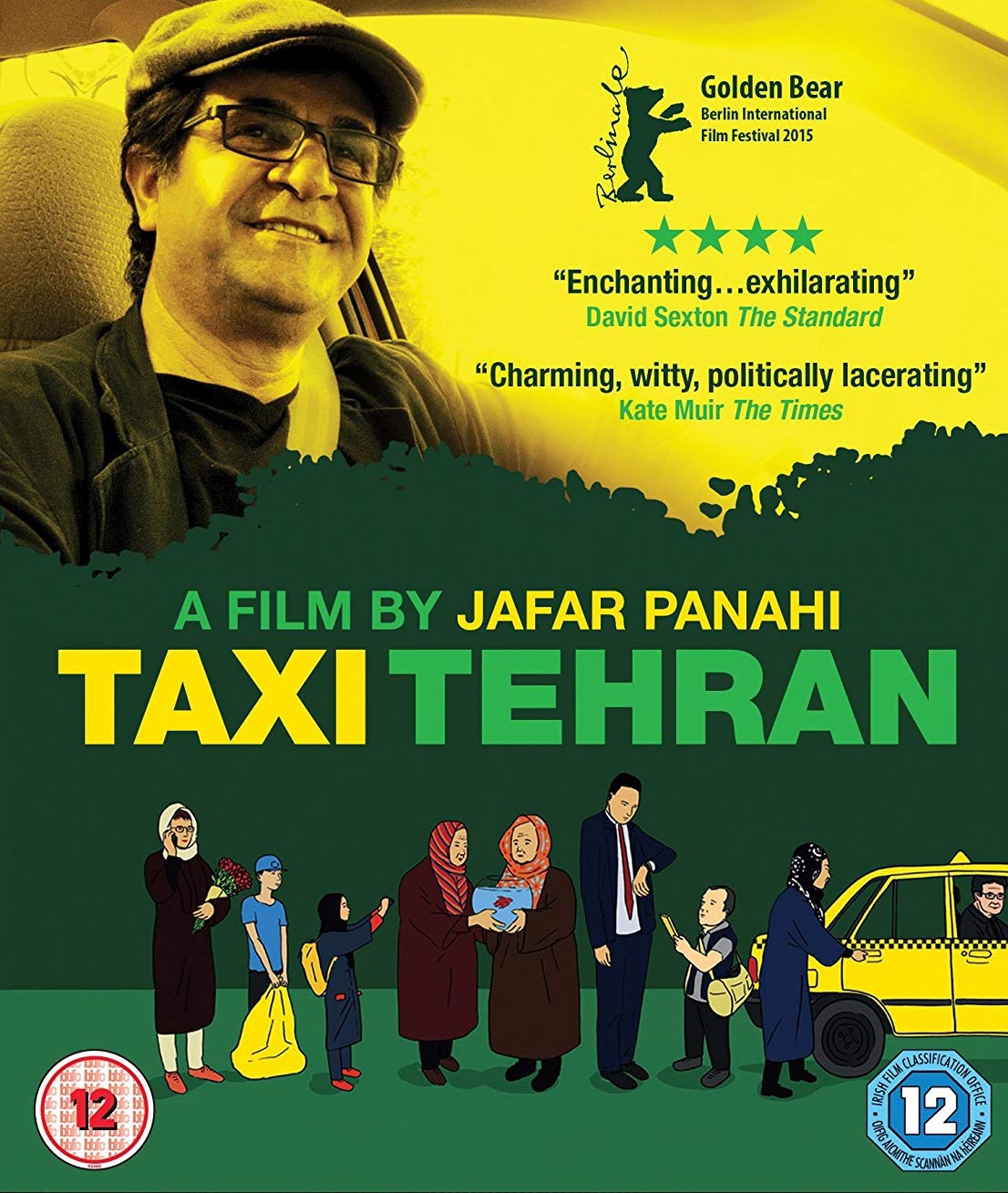 Taxi Tehran (2015) by Jafar Panahi Farsi with English subtitles, 1h 22m
When: 20:00, Tuesday, 12 Feb. 2019
Where: tuesday coworking, Belziger Strasse 71, 10827 Berlin-Schöneberg
Winner of the 2015 Golden Bear at the Berlinale, this Iranian docufiction stars and is directed by Jafar Panahi.
In 2010, Panahi was banned from making films and travelling, but that didn’t stop him smuggling out his film “Taxi” on a memory card. Taxi is a meta-film. A film on the constraints and delights of filmmaking. At the same time it is a portrait of the Iranian capital Tehran and set in a Tehran taxi that is driven by Panahi with passengers who candidly confide to him. The passengers include men and women, young and old, rich and poor, traditionalists and modernists, pirated video vendors, and advocates of human rights and are played by non-professional actors, whose identities remain anonymous.