By continuing to visit this site, you accept the use of cookies for statistical purposes. More information.

tuesday coworking is now three quiet, relaxed and independently owned & operated coworking spaces in Schöneberg & Wilmersdorf, Berlin. We’re open to flexible individuals or small teams in need of an office infrastructure without the distractions of home.

Why not come over for a tour or a free trial day in any of our three Berlin coworking spaces. Our all-access monthly memberships let you use three different, independent coworking spaces in one great membership!

High ceilings and loads of light. Pick a desk for yourself to work at in our main room (among them two motor-driven height-adjustable standing desks from Liftor). It’s quiet here, but we have a couple of break-out areas if you’re hankering for some social interaction.

Our upstairs first floor talker level is the place-to-be for anyone who likes it a bit more lively. We have some very very soft music (Soma FM – Groove Salad) playing in the background and you can take and make as many calls up here as you like.

In “Earth” (our Zoom Room on the ground floor) and “Air” (first floor) you can conduct your meetings, receive clients or just have a chat with a friend. Members can reserve the rooms using our online app or book them spontaneously at the space. Non-members can book them for €25 and  €20/hour + VAT respectively. Need a room? Get a room!

Specially built for our space, we have two sound-insulated cabins, which members can use for free for making or taking calls without disturbing the others. Zero distraction. Hugely practical.

With two Rode M3 microphones and one Zoom H6 Recorder, our sound-insulated room is perfect for recording your podcasts. tuesday members have in it yet another free perk included in their memberships. And since the booth is new, non-members can rent the booth for just €15/hour (+VAT) by appointment. Send us a mail if you’d like to record your podcast at our space: info@tuesdaycoworking.com.

Take a load off and relax in our chill kitchen. Make yourself some food on our cooker, sup some of our excellent Coffee Circle coffee and shoot the breeze with your fellow coworkers.

Looking to host a workshop, a 48-hour accelerator programme, a seminar or function or something else? Then check out our event space in Belziger Strasse, also available at short notice! More info

Yep, you read that right, we have a nap room! Schedule your power-nap by writing your name in on the sheet on the door, then close it behind you, draw the curtain, fold down the bed and grab those ZZZZs!

You can pick a desk for yourself or work in a two-person team in our front room. This is where the real coworking happens! You’re welcome to take calls here. If you want it really quiet, we suggest our quiet room next door.

Sit in one of the eight chairs around our big table and really concentrate on what you need to get done. No calls allowed here, but if you need to take a call, there are plenty of places you can go.

This room we call “Fire” (Feurigstrasse) and it’s the place to have meetings, receive clients and take phone or skype calls. The room seats 8 and is free to use for tuesday members. Non-members can book it for €20/hour. Find out about rental here

Make yourself a cup a coffee, sit back and relax on our comfy couch and heat up your lunch in our chill kitchen

Note: We get 5 kilos of freshly roasted “Buna’a Dima” coffee from Coffee Circle delivered to the space. Not only is it delicious and fair-trade, but for every kilo we buy, €1 goes to the farmer for training and sustainability programmes.

Our beautiful new Bundesallee space offers a variety of working options with standing desks, couches, a quiet focus room and supermassive tables downstairs for team work, and regular desks on our upper level.

In line with the industrial look of the space, we call our meeting room here “Metal”. It seats six and has a flatscreen TV (with Apple TV + HDMI cable) and optional large whiteboard on wheels.  The meeting room is free to use for tuesday members. Non-members can book it for €25/hour. Find out about rental here.

Our kitchen upstairs to the back and our lounge downstairs to the front offer two distinct areas for relaxation.

Cycling to work? Why not debrief in our shower!

A4 and A3 printing

This space is the only one of our three coworking spaces with its own A3 printer. Use of this is included in your membership.

That’s right, we’ve got the perfect solution for the free 2×2 square meter staircase to nowhere. We’re building a photo studio for products and other articles at the top of it! Check back here soon! 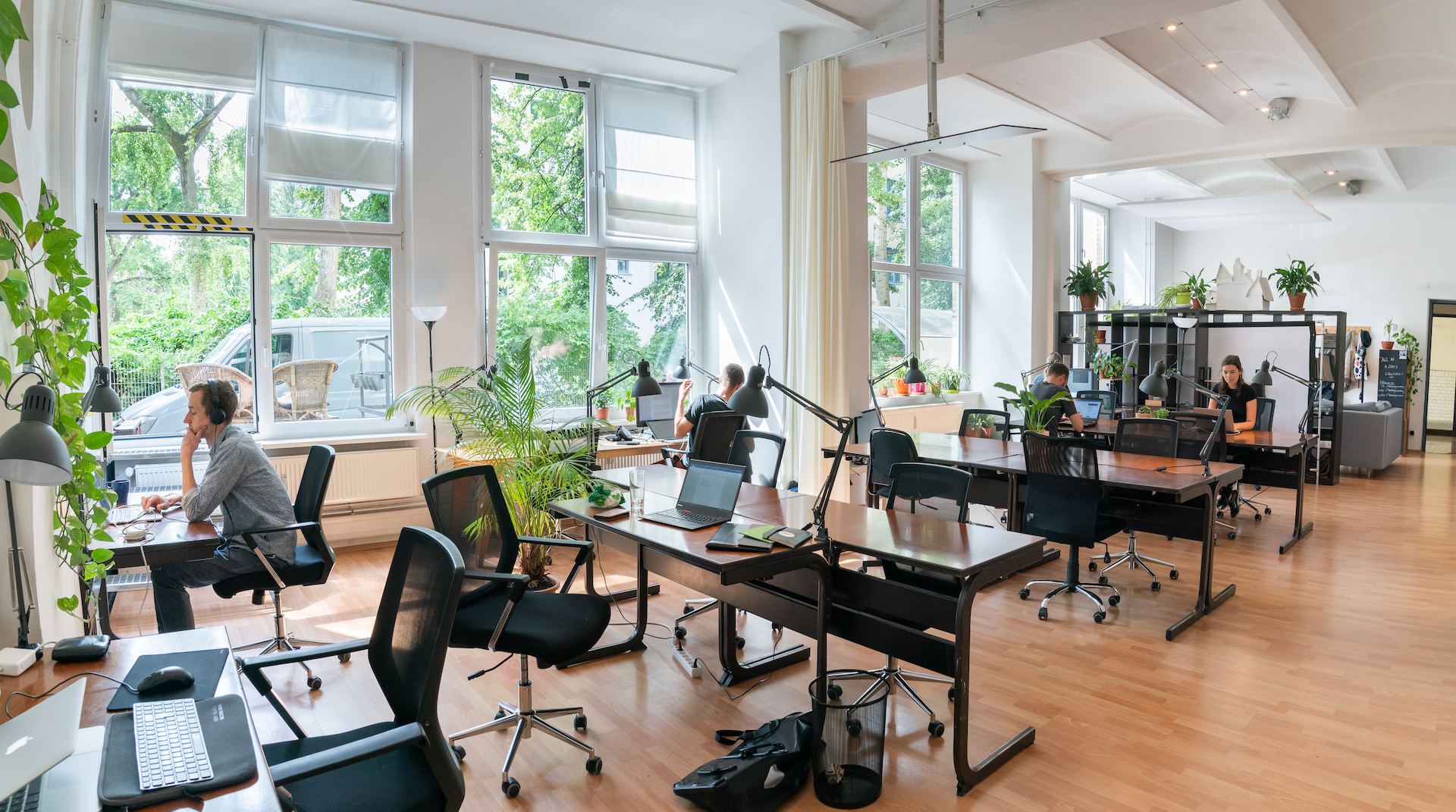 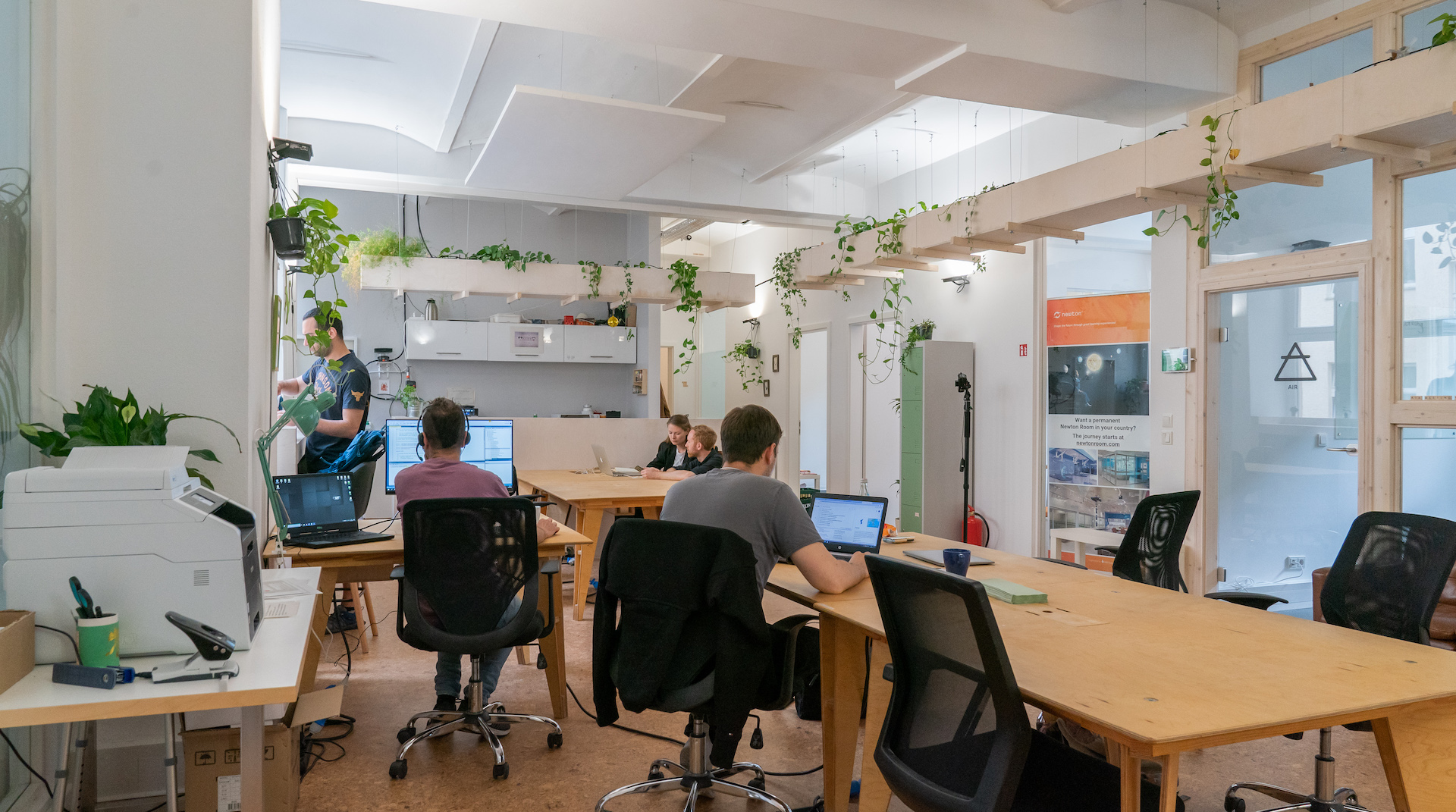 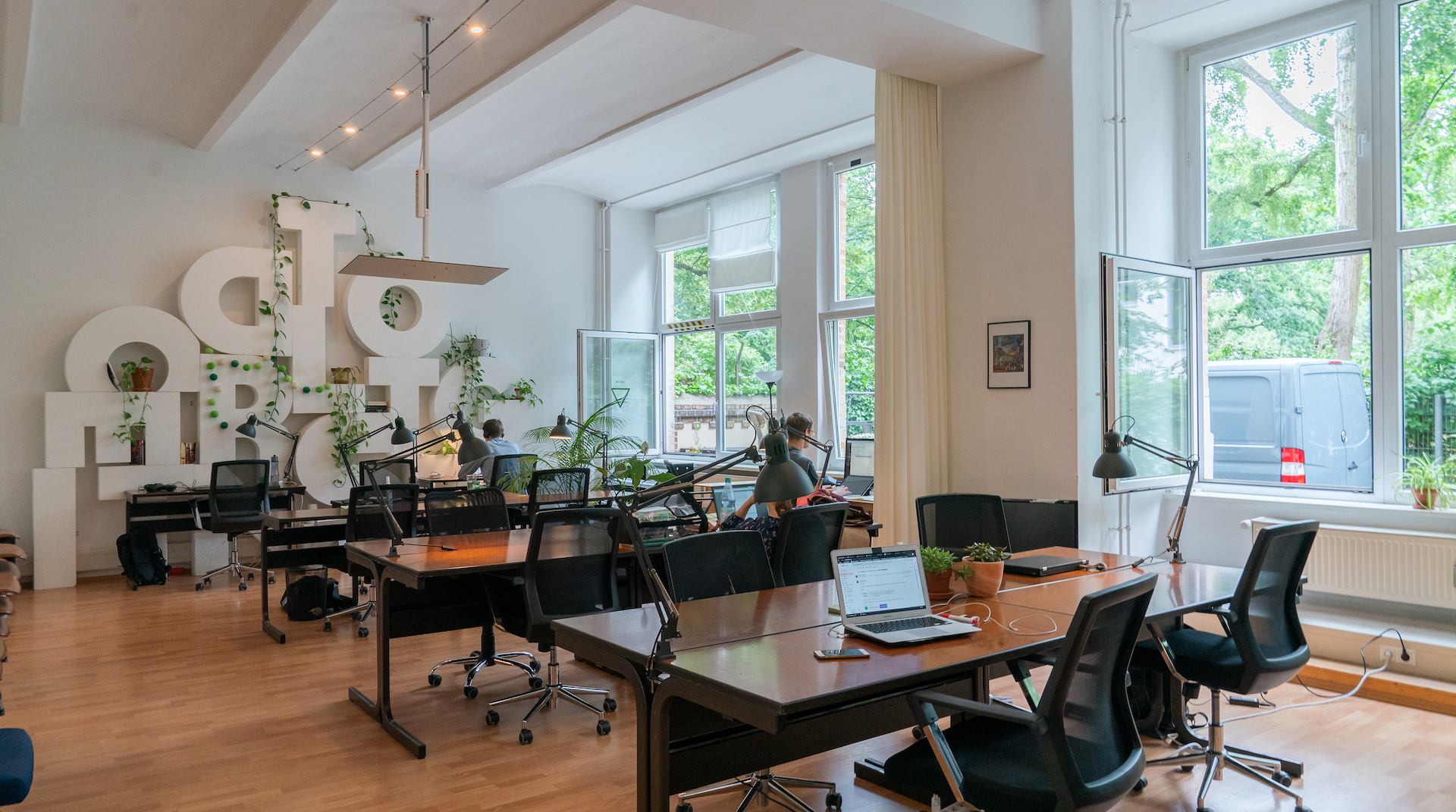 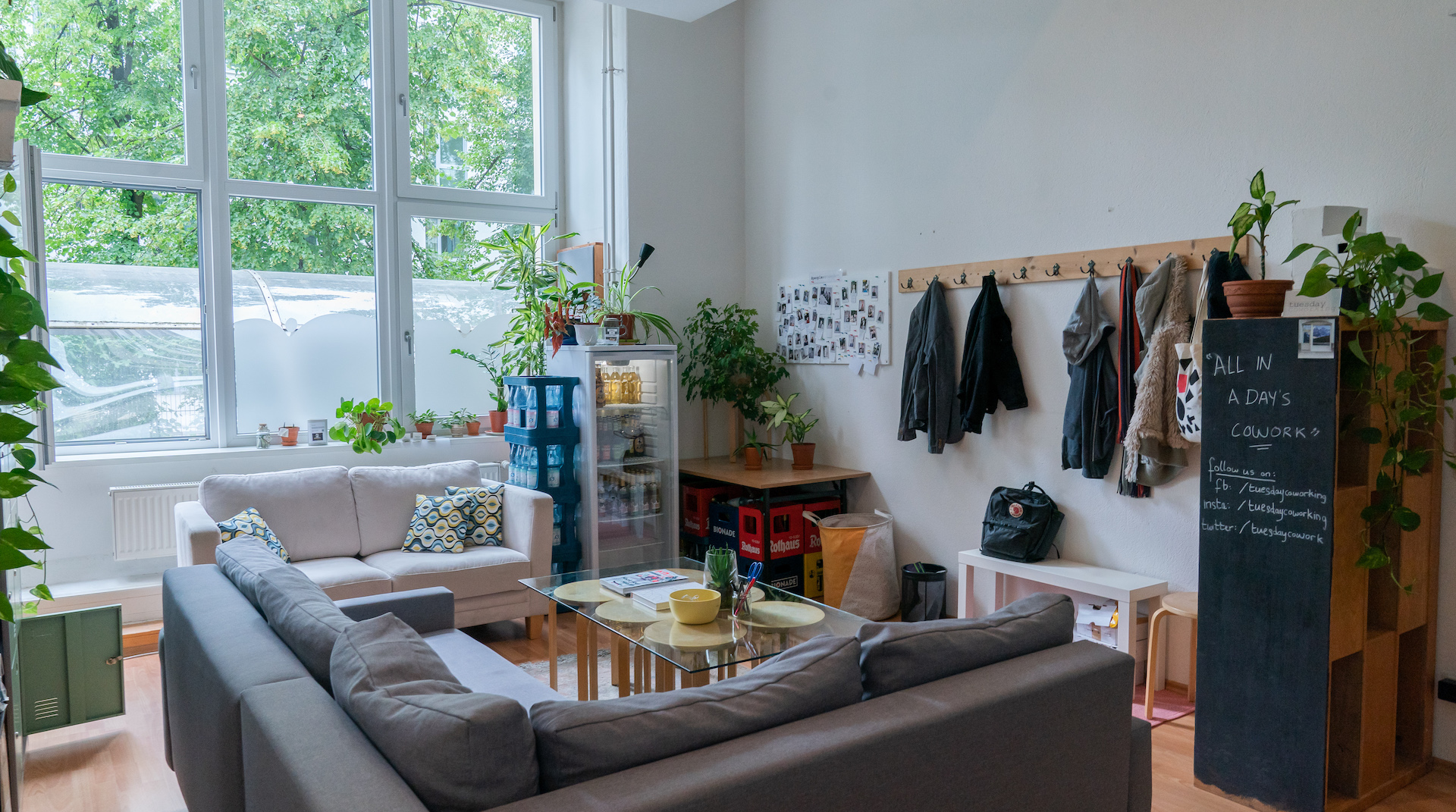 We offer a friendly alternative to the bustling, ultra-commercial coworking options, which seem to be taking over. As such, we focus more on Our Community & culture than big bucks & business. So come over, get your work done, play boules (no pressure), trade services with your fellow coworkers and join us at one (or both!) of our multi-award-winning coworking Berlin spaces!

When it comes to renting meeting rooms in Berlin, it can get very expensive very fast. Thankfully, as a member of our coworking space, you get a minimum of 5 hours access per month to our four meeting rooms at no extra cost.

The meeting rooms are perfect for meeting your clients, conducting interviews or even as a quiet and comfortable working environment if you want to work alone. The fact that we have four different rooms in three different spaces, means you can switch things up if you feel like a change of scene or choose the room to match the occasion of your meeting.

Available for use, also at no extra cost:

Non-members can also book our meeting rooms. Find out all the details here:

We also have two sound-insulated Skype cabins at our Belziger Strasse space where you can make and take calls without distraction and without disturbing your fellow coworkers.

Spread across our three locations, we have a total of eight team/private offices, which can hold anywhere between 1-6 persons (work stations).

Have a look at our dedicated Team Offices page to find out all the details and see our current availability.

Get your own fixed desk in our shared workspace along with all the perks that come with our monthly membership as well as your own locker thrown in for free!

This package gives you access to our coworking spaces with your own physical key! Set up a monitor, your family photos, your lamp and fan on your exclusive desk. Access to our Bundesallee space costs an additional €25*/month.

Full 24/7 access! Take a free desk wherever you like and still take advantage of a wide range of perks that come with membership at our coworking space

Full-time access to our two Schöneberg (Belziger Strasse + Feurigstrasse) coworking spaces. Access to our Bundesallee space costs an additional €25*/month. Let yourself in to any of our spaces at any time with your own phone code or transponder!

This, our half-time package, gives you access for 20 hours per week. Click on "More Info +" for all the details!

This package gives you access to our two spaces in Schöneberg (Belziger Strasse + Feurigstrasse) for max. 20 hours/week (includes evenings and weekends). Access to our Bundesallee space costs an additional €25*/month. We don’t monitor the hours, we trust you to be cool about this. If you repeatedly go over your allotted hours, come to us and we’ll try to fashion a plan that works for both parties.

Give Back The Gap
19% Discount

tuesday coworking is trying to set an example for other companies by giving back the gap. This means we're offering womxn who cowork from our space a discount of 19% on their memberships.

Society has it such that women earn 19% less than men (the so-called unadjusted gender wage gap). We’re giving back the gap, meaning womxn can cowork from our spaces for 19% less.

tuesday coworking is trying to set an example for other companies by giving back the gap. What does that mean? It means we’re offering womxn* (specifically: freelancers / entrepreneurs / solopreneurs who identify as women) our Flex 50, Flex 100 and Fixed Desk coworking memberships with a discount of 19%. This corresponds to the unadjusted gender wage gap in Germany most recently calculated in 2020.

If even a small company like ours can afford to set an example like this, then surely bigger companies with greater profits can be encouraged to take a moment to think in what ways they too can contribute to reducing the gender pay gap.

We have four meeting rooms that seat between 1 and 8 people. Bookings are also possible at short notice.

Whether it’s for a team workshop or your professional online interview, our meeting rooms have different features for every occasion. Included at no extra charge in all our meeting rooms are whiteboard and WiFi.

Optionally, depending on the meeting room, you can add the following Extras:

* All prices are exclusive of VAT.

We offer the option to register your business with us (+ Google Maps). This is available to both members and non-members. Find out the details by clicking on "More Info +"

We can also scan in your letter mail for total € 69/month* or forward them to your physical address for total €89/month*.

Here, you get your name or company name on our mail box and can use our address as your registered business address with the German authorities. You can also use the address for your Google Maps entry. Your new address will look as follows:

Sign-up for this service with us here or send us an email: info at tuesdaycoworking dot com

What methods of payment do you accept?

We can issue invoices to your company or to you personally, which can be paid either via credit card, direct debit or bank transfer.

Is it possible to reserve one of the two Skype cabins at Belziger Strasse?

Yes, you can use our Member Portal’s online booking system to book a cabin for yourself for up to three hours at a time.

How many coworkers are working at tuesday coworking?

It fluctuates, as of January 2022, we have 170 expert freelancers and team members.

How can you guarantee that there will be enough space for everybody?

Since the majority of our members avail of the Flex 50 (20 hours per week) option, it’s extremely rare that we experience any issues here.

How long is the minimum membership?

How long has tuesday coworking been open for coworkers?

Can I bring my pet dog, Sir Meowsalot?

Strange name for a dog, but sure, provided he’s not disruptive for your fellow coworkers, bring Sir Meowsalot along!

What adjectives would you ascribe to the different spaces?